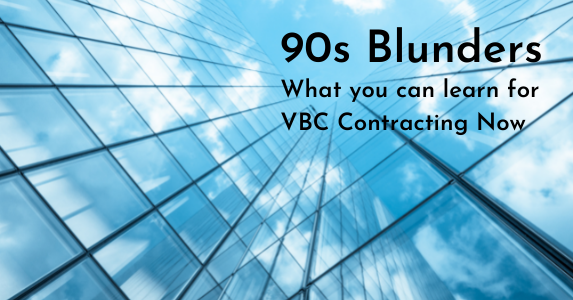 90’s Blunders: What You Can Learn for VBC Contracting Now

It’s been thirty years since the Clinton Administration attempted a sweeping healthcare system overhaul. To this day change in how healthcare is delivered is still developing. What we now call value-based care was called capitation or accountable care back then. But what ended up stifling these models then and how can we use past mistakes to inform our processes now?

After decades of inflation and stagflation, insurers of all types began looking for ways to stem rising healthcare costs. In response, managed care arrangements—cost containment through fee-for-service with capitation, total cost of care, and other payment arrangements—were developed to shift healthcare costs to providers.

Several steps taken by payers resulted in the care model being ineffective. As they used “gatekeepers” to evaluate provider performance and prior-authorization to deny costly treatment, this forced providers to treat patients within the framework or lose out. This lead to a relationship that was tumultuous and adversarial in nature.

Rather than ask providers to repay their share of the loss, payers held back some of the “per member per month” capitated rate just in case. This was thought to be a kinder way of funding potential losses rather than asking for a cash call at the end of an unsuccessful contract. In reality, withholds became indirect discount fees. Payers found loopholes or “unforeseen” expenses to retain the withhold amount, leading to many providers never even seeing that money and success was rare.

Although managed care contracts offered the possibility of shared savings, the reality was much different. Shared risk contracts were missing the sharing part. With more negotiation power, payers at the time believed this was a win, in the end payers lost too, though, because providers no longer had confidence in them and became reluctant to collaborate.

Data in the healthcare industry had always been held by payers. Once a patient left the office, the provider had no way of being able to track patient data. They didn’t know if their patient was filling prescriptions or visiting the ED. Providers were left in the dark.

It took quite a while for the technology to catch up to the needs of payers and providers. Thirty years ago, the interconnectivity needed simply wasn’t possible. Quality analytics and data science processes enable a true, fair rate based on what the cost of care would be to deliver. Previously, plans just looked at historical costs and set lower rates, passing risk to the provider. This seemed like a win-win situation, but without actuarial rigor it failed.

What We Can Learn

1. Be Collaborative, not Adversarial

In VBC, everyone has skin in the game. Health plans and providers need to partner to improve all aspects of care in the VBC world—including quality, utilization, and cost. In order to be successful in value-based care, you need to acknowledge how the relationship has been strained in the past and make a demonstrated effort to be collaborative in the transition to value-based care.

The incentives and goals of both payer and provider have to be well-defined prior to contracting in order to facilitate the development of unified objectives. You want to make clear what you’re both hoping to accomplish so that you are able to draw out incentives and designate the appropriate metrics and measurements to gauge success.

3. Be Transparent with Your Data

Claims data offers a treasure trove of information that lays the groundwork for scalable, successful treatment plans. It’s imperative to freely exchange information so your providers can see how they’re performing and access actionable insights when needed, where needed, so they can choose the best avenue of care and see the impact of those decisions.

What the Future of VBC Holds

Value-based care will continue to grow throughout the 2020’s. This transition will drive change that trickles down to all facets of healthcare, impacting profit margins and the traditional financial models. As more data becomes available quicker, payers and providers will be empowered to make better decisions that lower costs, improve quality, and improve the patient and provider experience.

According to Managed Healthcare Executive, “Continued democratization of data will allow for more robust data modeling to drive the right behavior for patients, providers, and payers aligned around value-based arrangements with predictive insights, targeted communication and retrospective analysis.”

We can also expect that healthcare will become more efficient through effective cohort management and utilization of economies of scale. Through the interconnected environment established between payers and providers, treatment will become streamlined as member populations are referred to providers with demonstrated and repeated exposure and success treating specific conditions.

Researchers at the Mayo Clinic have found that “hospitals that perform the same procedure or treat the same condition repeatedly do it better than those who treat relatively few of the same condition or procedure. Increasing evidence also shows this relationship for some non-surgical therapies as well. There are better outcomes for patients, fewer complications, which translates into shorter length of stay, decreased mortality and increased survival just to name a few.”

VBC Contracting: Challenges and Keys to Success for Health Plans 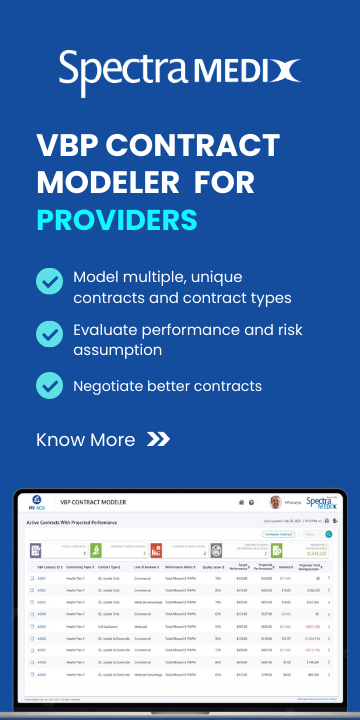 SpectraMedix has a vast library of value-based care resources for payers and providers alike,
including eBooks, Blogs, On-Demand Webinars, and Case Studies.